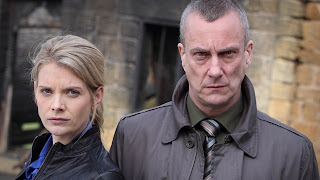 At CCS we like to think we can ensure all lines of communication remain open - and we just have.

During the filming of a popular ITV detective drama series in Yorkshire we installed a temporary VoIP (Voice over the Internet Protocol) telephone system for the production crew of the DCI Banks series.

Left Bank Pictures is currently filming the second series of the detective drama, starring Stephen Tompkinson and Andrea Lowe, which is based on the series of books by Peter Robinson and set in Leeds and neighbouring towns and cities.

We carried out the work at the production team’s base in Burley Road, Leeds, in time for the start of filming later this month.

Jo Healy, assistant co-ordinator at Left Bank Pictures, tells us: "We’re working in Yorkshire for just four months but obviously we need internet access and telephones throughout our time here. The fact that we are only located here for a short period of time often causes problems with large communications providers as they require a minimum term contract – often 12 months – which is just not suitable for us.

"CCS came on recommendation and they have listened to our needs and installed a system which ticks all the boxes. They had us up and running very quickly and the service is excellent value - as you can imagine we make dozens of telephone calls a day, mostly to mobiles, which can soon add up in costs."

While the actual technology and installation work was not out of the ordinary for us, the project is somewhat unusual - it is the first time we have kitted out an office for a film crew. It is nice to think that we have helped bring the production together, albeit more as an ‘extra’ than a starring role. I have to admit I hadn’t seen the programme before but I think I will enjoy watching the next series when it airs later this year.